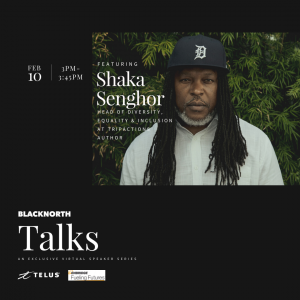 Join us in this deep conversation about authenticity as it relates to representation, identity, and diversity.

This is a Pay What You Can event. We hope you’ll feel inspired to donate at any point before, during, and after the show. Your generous contributions will go toward the following BlackNorth community initiatives:

• BlackNorth Academy (a bespoke C-Suite and board preparedness program)

Shaka Senghor is the Head of Diversity, Equality, and Inclusion at TripActions. He is also the President of Shaka Senghor, Inc., and Founder of Redeemed Sole.

His memoir, Writing My Wrongs: Life, Death, and Redemption in an American Prison, debuted on The New York Times and The Washington Post Best Seller Lists. Shaka’s widely anticipated sophomore book, Letters to the Sons of Society will be released in January 2022.

Shaka is a former MIT Media Lab Director’s Fellow and a former Fellow in the inaugural class of the W.K. Kellogg Foundation’s Community Leadership Network. His 2014 TED Talk was featured in their “Year in Ideas” roundup and has over 1.7 million views. In 2021, he was featured on the Nas track Composure.

Shaka is the recipient of numerous awards, including the 2012 Black Male Engagement (BME) Leadership Award, the 2015 Manchester University Innovator of the Year Award, the 2016 FORD Man of Courage Award, and the 2016 NAACP Great Expectations Award. He was recognized by OWN (the Oprah Winfrey Network) as a “Soul Igniter” in the inaugural class of the SuperSoul 100. He has taught at the University of Michigan and shares his story of redemption around the world.

Read Shaka’s latest book, “Letters to the Sons of Society”; it invites men on a journey of honesty and healing through a collection of beautifully written letters to Shaka’s sons Jay and Sekou. Throughout the book, Senghor traces his journey as a Black man in America and unpacks the toxic and misguided messages about masculinity, mental health, love, and success that boys learn from an early age. It serves as a soulful examination of the bond between father and sons, and a touchstone for anyone seeking a kinder, more just world.

Please note this event will be held online.

1. RSVP today.
2. Save The Date – We will email you an access link to join the event.
3. Attendance is first come first serve. In the case we reach capacity, this event will be recorded for viewing at a later time.