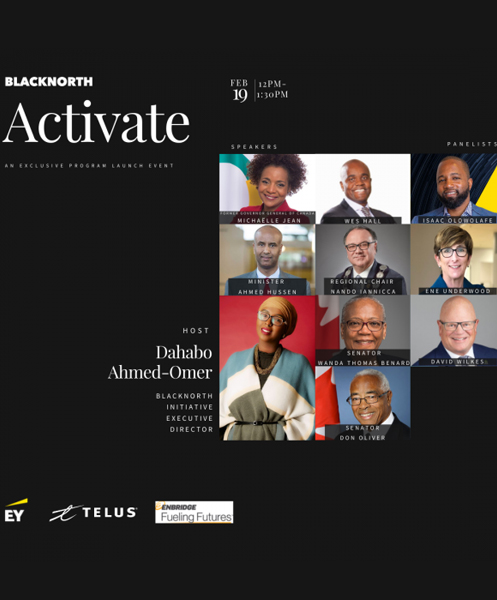 In celebration of Black History Month, we invite you and your company to join us as we have conversations with Black Canadian leaders about the history of Black Canadians as well as the launch of new BlackNorth programs and initiatives centered around empowering, educating, and building generational wealth.

We hope you’ll feel inspired to donate at any point before, during, and after the show. Your generous contributions will go toward the following BlackNorth community initiatives:

Meet The Speakers
Minister Ahmed Hussen – The Honourable Ahmed Hussen was first elected in 2015 to represent the riding of York South—Weston. He has previously served as Minister of Families, Children and Social Development and Minister of Immigration, Refugees and Citizenship. Minister Hussen immigrated to Canada in 1993 and settled in Toronto. He began his career in public service after high school, working with the Hamilton-Wentworth social services department.
Senator Don Oliver – Don Oliver retired as a member of the Senate of Canada in 2013 after 22 years of service. He now resides at his beloved farm in Pleasant River, Queens County, Nova Scotia, reading, writing, and meeting with friends.

Senator Don Oliver – Don Oliver retired as a member of the Senate of Canada in 2013 after 22 years of service. He now resides at his beloved farm in Pleasant River, Queens County, Nova Scotia, reading, writing and meeting with friends. Honourable Dr. Donald H. Oliver, Q.C. rose to serve with distinction as Speaker Pro Tempore (Deputy Speaker) in the Senate of Canada in Ottawa; as Chairman of six Standing Committees of Parliament; as Chairman or Deputy Chairman of seven Inter-parliamentary Associations; and as an ubiquitous spokesperson for Diversity, Pluralism, fairness and equality, for which he was awarded five Honorary Doctorate degrees from Canadian Universities.

Ene Underwood – Ene Underwood is CEO of Habitat for Humanity Greater Toronto Area (Habitat GTA), a non-profit housing developer serving Toronto, Brampton, Caledon, and the Regions of Durham and York. Habitat for Humanity mobilizes communities to help working, lower-income families build strength, stability, and self-reliance through affordable homeownership. Homes are delivered through a combination of volunteer builds, contractor builds, and partnerships with non-profit and for-profit developers.
Wes Hall – Founder and Chairman of Kingsdale Advisor and BlackNorth Initiative; with over 20 years of experience in corporate governance and shareholder communications, Wes Hall has established himself as the preeminent leader in shareholder advisory services and contested investor situations. Canada’s leading newspaper The Globe & Mail has called him one of the nation’s “most influential powerbrokers” and Canadian Business magazine named him one of the “most powerful business people” in 2016.

Dahabo Ahmed-Omer – Executive Director of BlackNorth Initiative. Ms. Ahmed-Omer has accumulated a wealth of experience and accomplishments in performance measurement, policy development, HR planning analysis, and employment equity and diversity sectors. Ms. Ahmed-Omer has been the recipient of notable awards over the years, including the exceptional service within the Federal Public Service, the Canada150 Community Builder Award, the Hope Academy community contribution award, the Ottawa Black History Community Leadership Award, the top 100 under 40 Most Influential Person of African descent in support of United Nations decade and most recently, the Globe and Mail’s Inaugural Business Changemakers Award (2021)

David Wilkes – David Wilkes was appointed President and CEO of the Building Industry and Land Development Association of the Greater Toronto Area (BILD) in January 2018. Mr. Wilkes has served the majority of his career working for industry associations previously representing retail and consumer packaged goods industries.

Michaëlle Jean – Michaëlle Jean is the 27th Governor-General, Commander-in-Chief of Canada, sworn in September 27, 2005, for a five-year mandate. As soon as the mandate ended, on October 1st, 2010, the United Nations immediately called on her to become UNESCO Special Envoy to support reconstruction efforts in Haiti, her country of birth devastated that same year as a result of a powerful earthquake that killed hundreds of thousands, with as many wounded and displaced. From 2011 to 2014, Michaëlle Jean also served as Chancellor of the University of Ottawa, where her offices as UNESCO Special Envoy were hosted. On November 30, 2014, Michaëlle Jean then becomes the 3rd Secretary-General of La Francophonie at the 15th Summit of Heads of State and Government held in Dakar, a position to which she devoted her whole energies from January 5, 2015, to January 3, 2019

Senator Wanda Thomas Bernard – Dr. Wanda Thomas Bernard is a highly regarded social worker, educator, researcher, community activist, and advocate of social change. She has worked in mental health at the provincial level, in rural community practice at the municipal level, and, since 1990, as a professor at the Dalhousie School of Social Work, where she also served as director for a decade. In 2016, she was appointed Special Advisor on Diversity and Inclusiveness at Dalhousie University and she is the first African Nova Scotian to hold a tenure track position at Dalhousie University and to be promoted to full professor.

Please note this event will be held online.
1. RSVP here.
2. Save The Date – We will email you an access link to join the event.
3. Attendance is first come first serve. In the case we reach capacity, this event will be recorded for viewing at a later time.